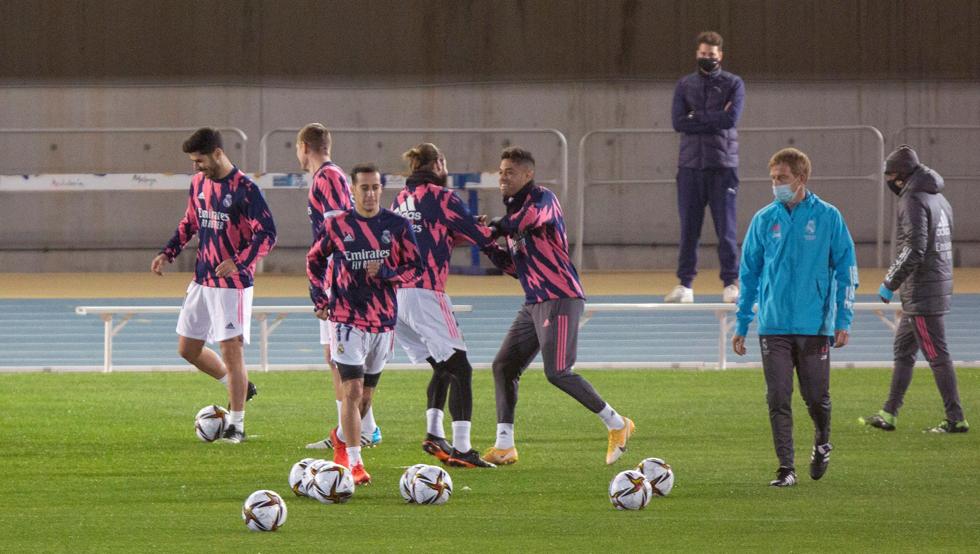 He Real Madrid he trained this Monday at the stadium Malaga city to prepare the semifinal of the Spain Supercup who will play against him Athletic club Thursday (21: 00 / # Vamos) after flying directly from Pamplona, where he had been since Friday without the possibility of returning to Madrid due to the storm Filomena.

Zidane He prepared a session at the Ciudad de Málaga stadium, annexed to the Martín Carpena pavilion, which began with different exercises on the ball and series of runs to later practice the circulation of the ball and the definition. In addition, as reported by the club on its website, the training ended with a match on a small field before taking steps to center exercises and shots.

He Real Madrid will return to exercise this Tuesday morning two days after starting his fight to defend the title he won last season, in Jeddah (Saudi Arabia) after eliminating the Valencia (1-3) and win the final at Atlético de Madrid in the penalty shootout (4-1) after drawing 0-0.

Dani carvajal and the serbian Luka jovic they will not be, at least, in the semifinal against Athletic, while the Brazilian Rodrygo Goes it is low of long duration due to a muscle injury affecting the tendon in the right biceps femoris.

Also note that the merengue team stays at the Gran Hotel Miramar in Malaga. It is a five-star hotel that was once a palace and has now become one of the most luxurious hotel locations in the Costa del Sol capital. There he will remain concentrated to prepare for the semifinal against Athletic. If they go to the final, they would see faces with Real society or Barcelona in La Cartuja (Seville).

Real Madrid, who was trapped without being able to travel through the temporary Filomena in Pamplona, ​​he decided to travel to Malaga directly without going through the Spanish capital in order to prepare his Super Cup commitment. The white club preferred to simplify its plans to avoid new unforeseen events due to Inclement weather. The merengue expedition landed this Monday without problems at Malaga airport and arrived at the Hotel Miramar around 1:00 p.m. to settle in and have lunch before training in the afternoon.

Upon arrival, Madrid was greeted with their usual media halo. Photographers immortalized the merengue return to Malaga after more than two and a half years, when he last played in The Rose Garden. One of the most wanted players was Isco Alarcon. The man from Malaga is barely counting this season for Zidane and everything indicates that in June he will end his white stage after eight seasons.